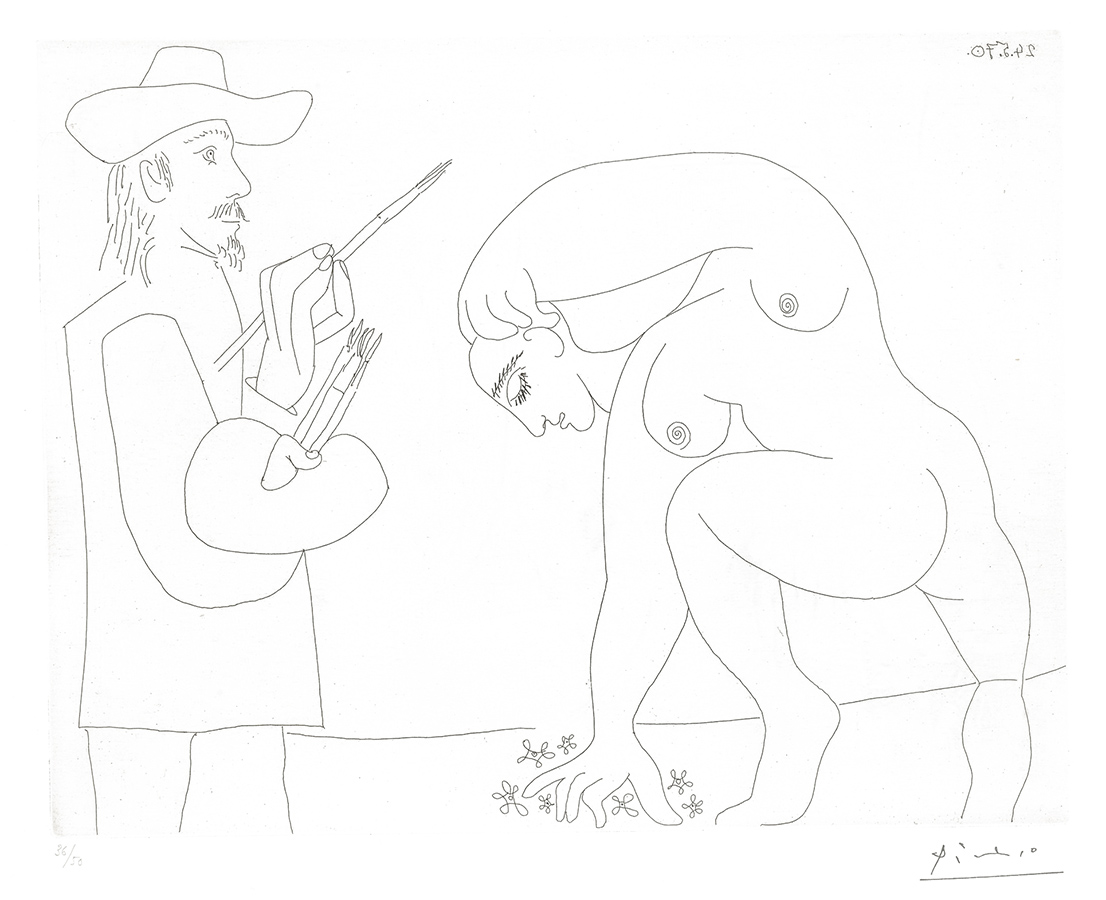 Pablo Picasso Peintre et Femme Cuillant des Fleurs (Painter and Woman Picking Flowers), 1970 showcases a beautifully crisp work of art that Picasso imaginatively creates. Simple and clean lines contouring the bodies of the two figures immediately grasp our attention. Picasso’s apt for detail is really shown in this work where each of the faces are not lost by the abstract quality. The painter on the left is mesmerized by the beauty of his muse directly posing nude in front of him. His severely emphasized hand holds up a paintbrush as if guiding the audience where to look. As our eyes wander over to the elaborately drawn woman where her facial features depict a Picasso-esque face—strong nose, slightly parted lips, and beautiful almond eyes. She poses in such intricate manners as if she was once a dancer or acrobat. There are tiny flower petals laid and strewn around her hand. She is seen reaching perpendicular to the ground to pick these flowers. You can sense that her movements are graceful and nimble even as her bodily form beautifully contorts.

Created in 1970, Peintre et Femme Cuillant des Fleurs (Painter and Woman Picking Flowers) is an etching on wove paper stamped by Pablo Picasso (Malaga, 1881 – Mougins, 1973) in the lower right margin and numbered from the edition of 50 in pencil in the lower left; published by Galerie Louise Leiris, Paris and printed by Crommelynck, Paris.

Catalogue Raisonné & COA:
Pablo Picasso Peintre et Femme Cuillant des Fleurs (Painter and Woman Picking Flowers), 1970 is fully documented and referenced in the below catalogue raisonnés and texts (copies will be enclosed as added documentation with the invoices that will accompany the final sale of the work):

Pablo Picasso revolutionized the art world and to many is THE artist of the 20th century. He is famous for his role in pioneering Cubism with Georges Braque and for his melancholy Blue Period pieces. Original signed Picasso lithographs and prints are a sure investment. Madoura Picasso ceramics are highly collectible in their own right.

Have one to sell? Sell Pablo Picasso fine art with us

Sell your Pablo Picasso fine art with us. We offer free evaluations. Learn more about selling with us.