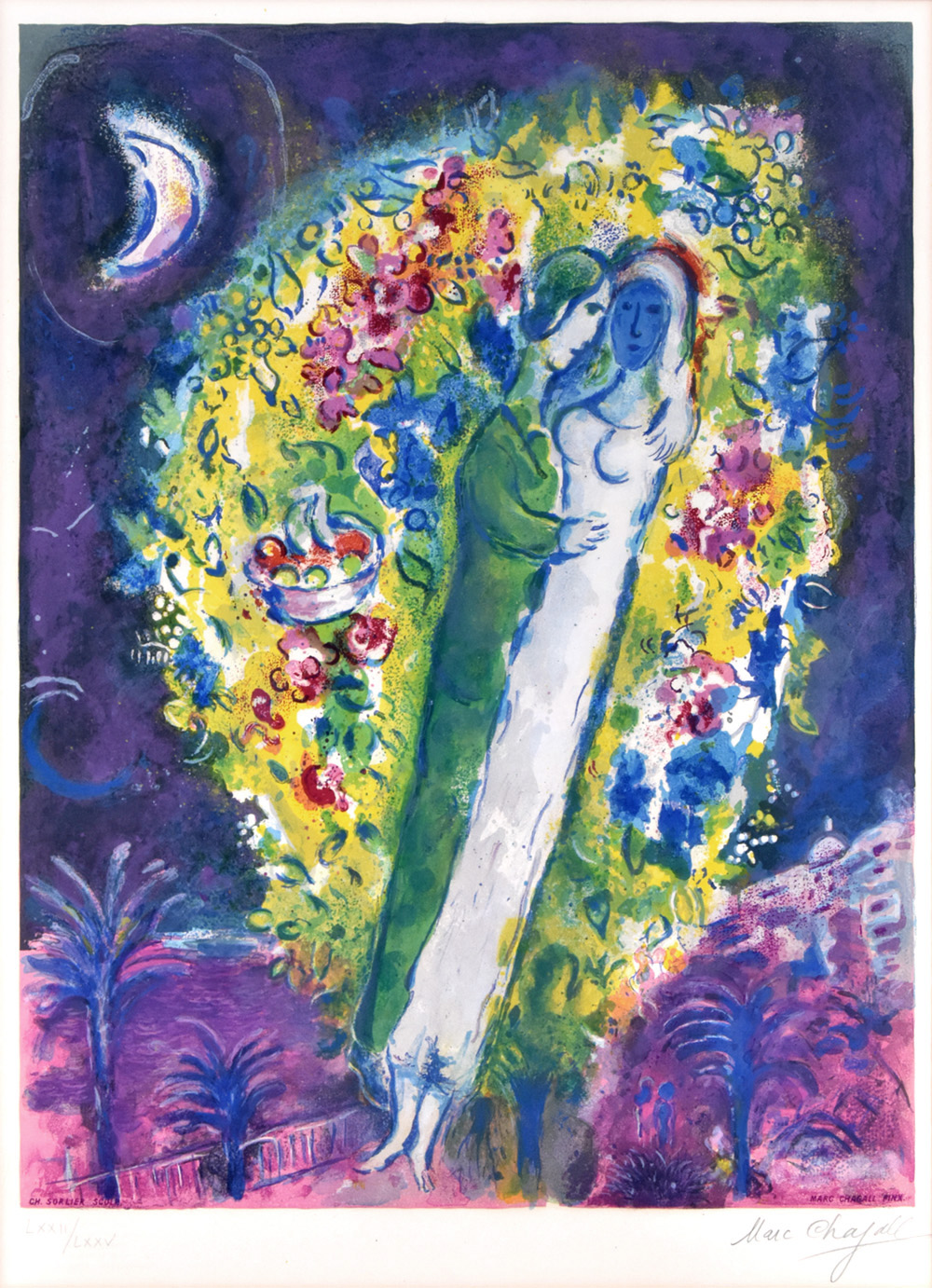 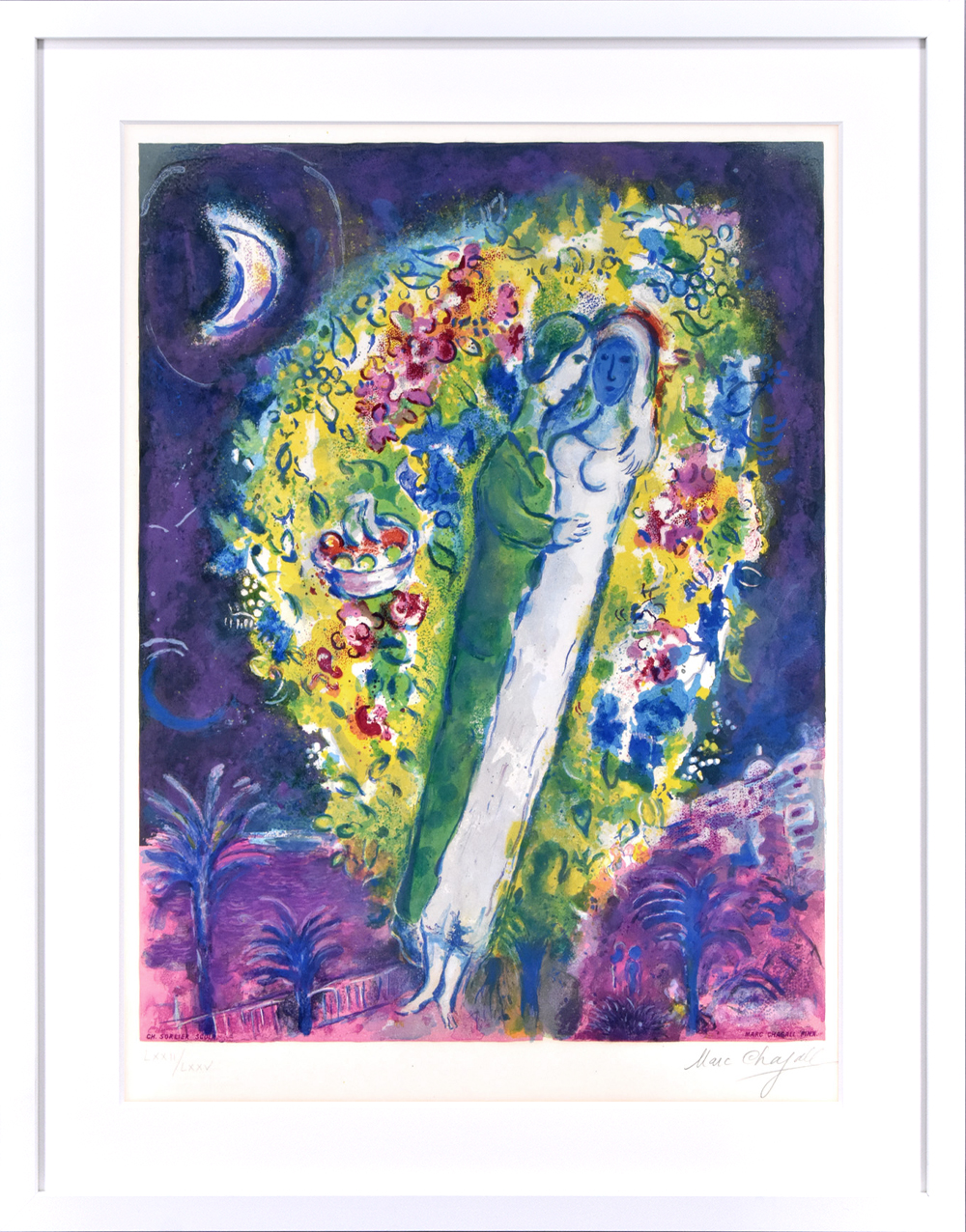 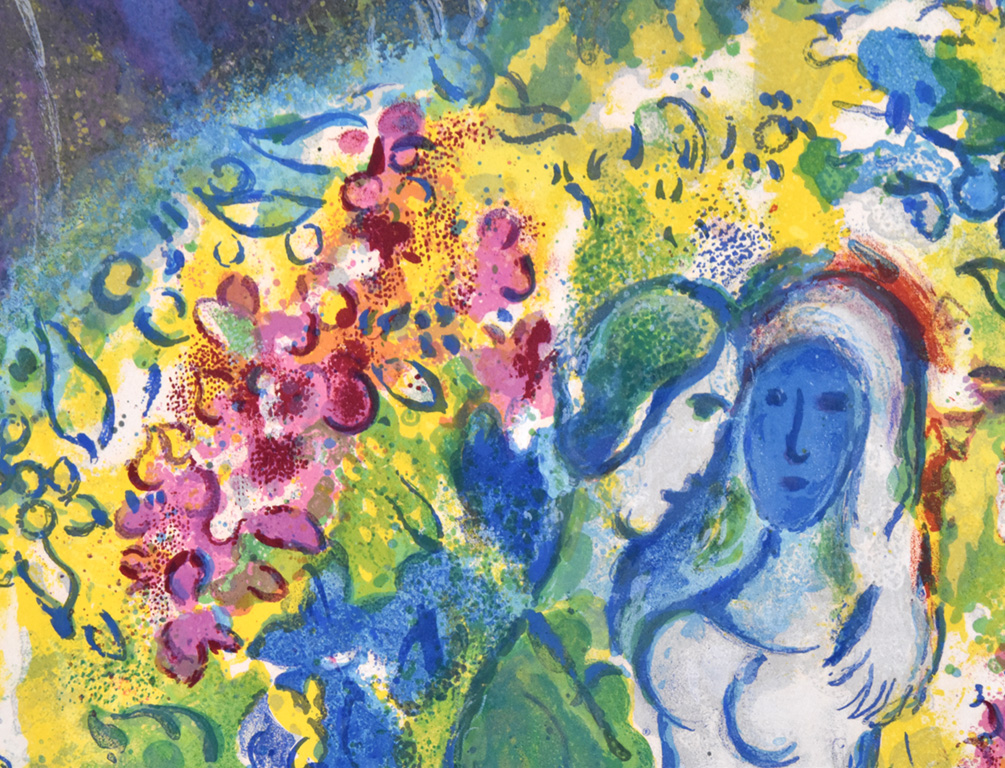 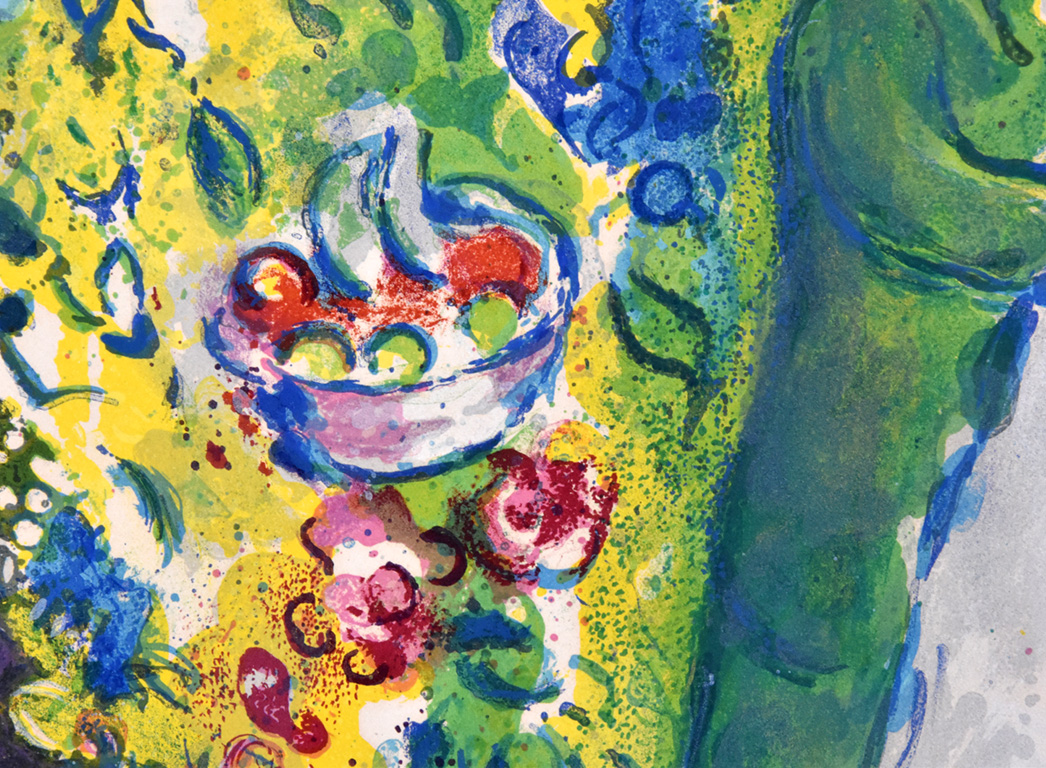 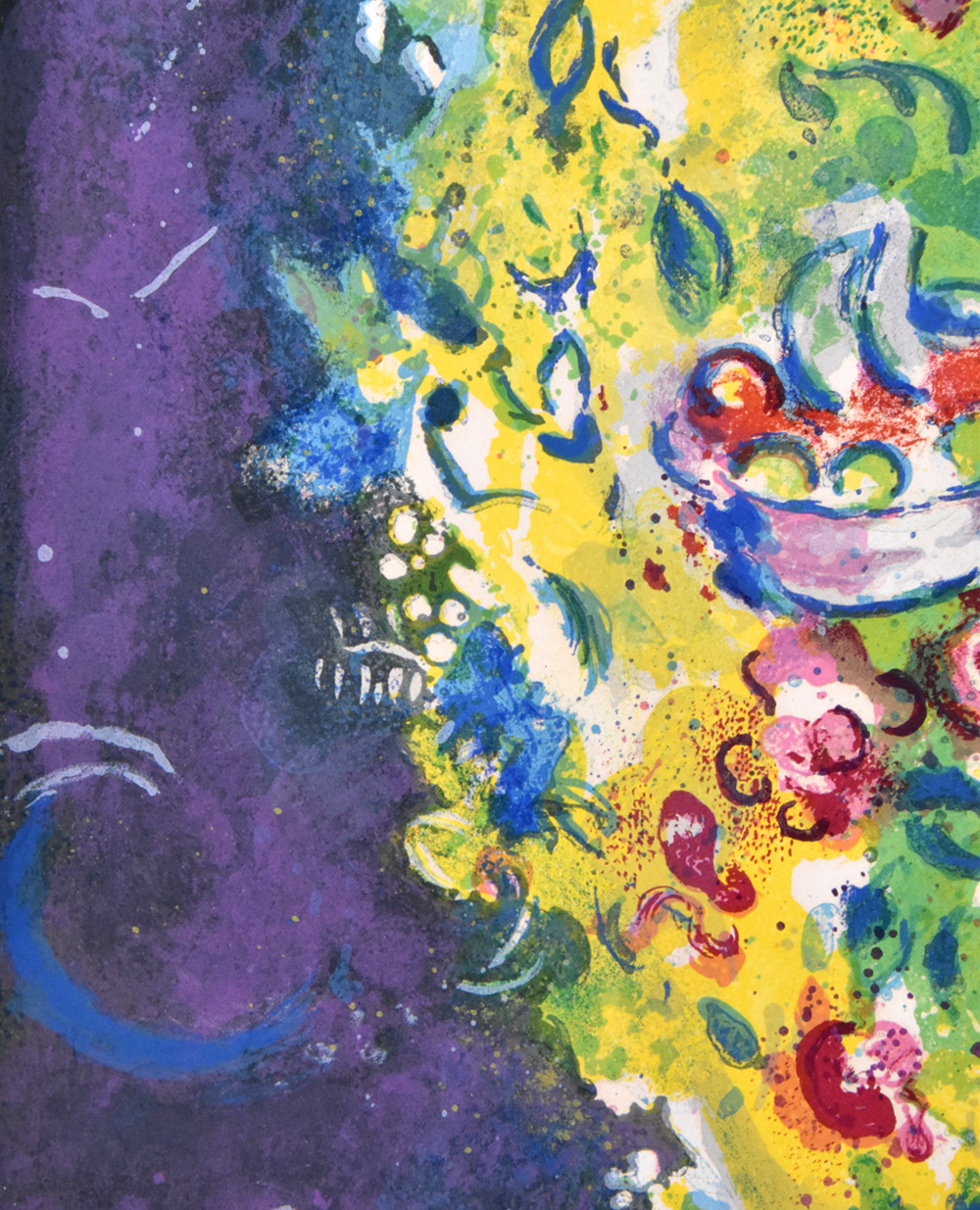 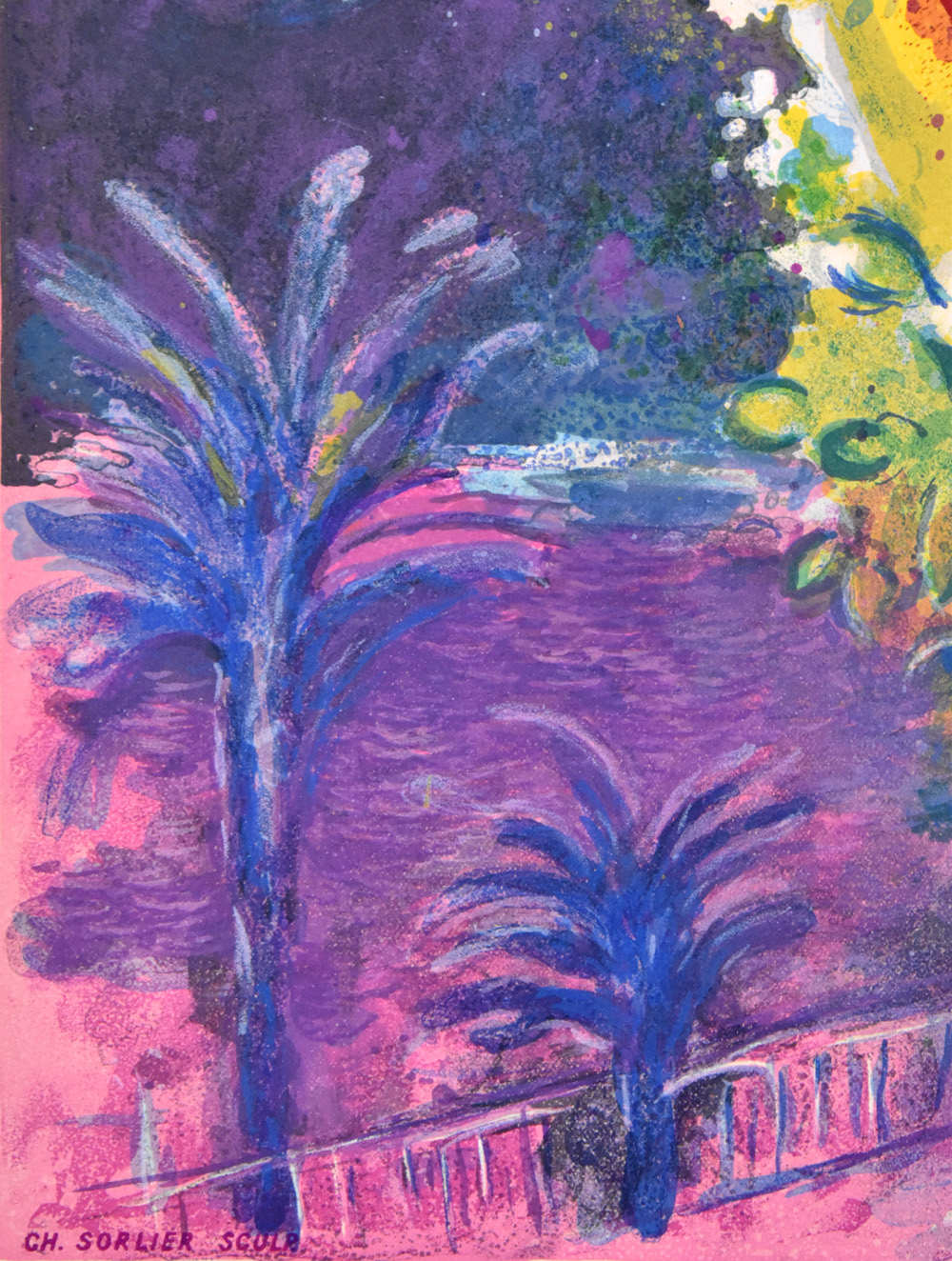 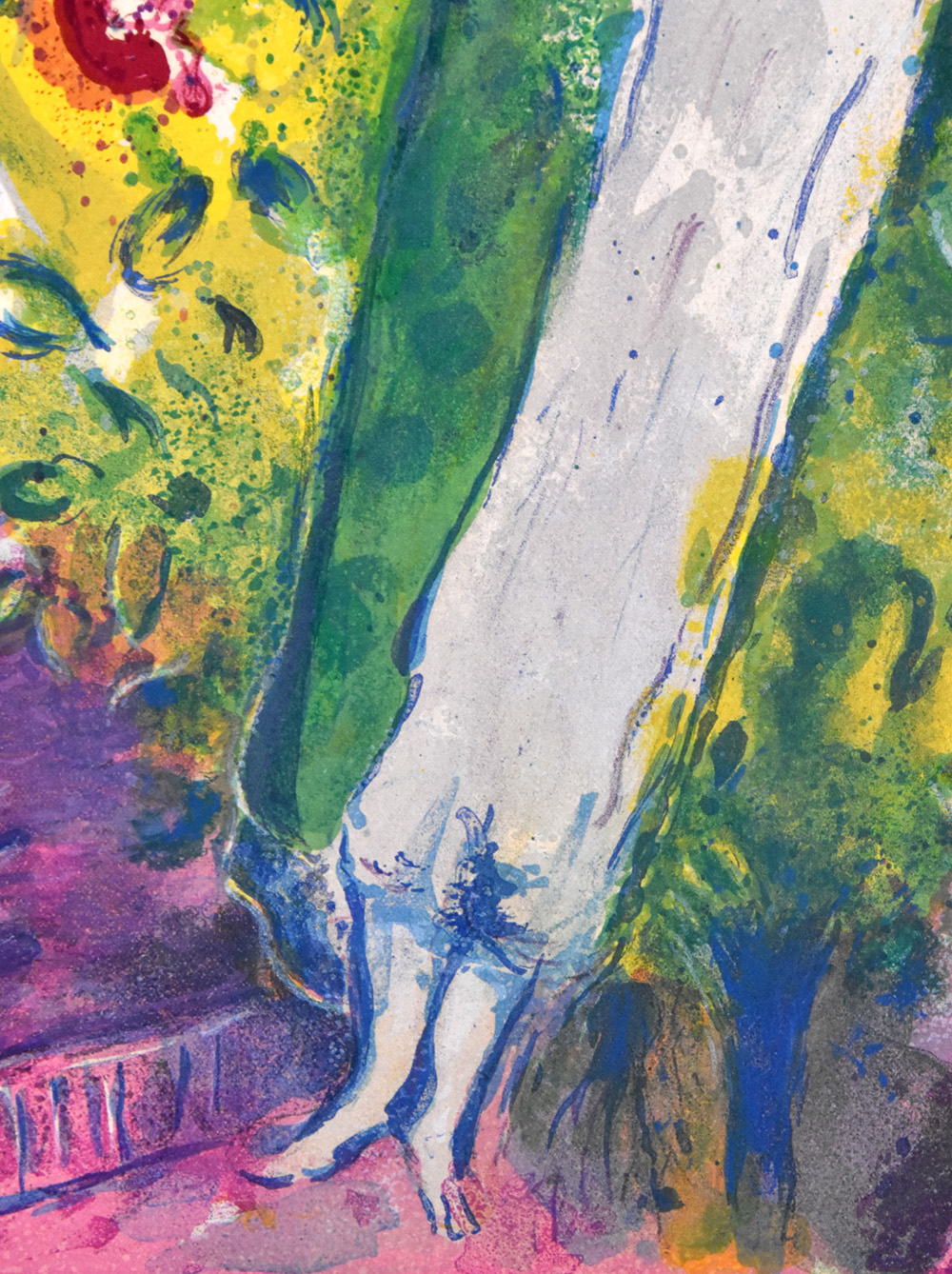 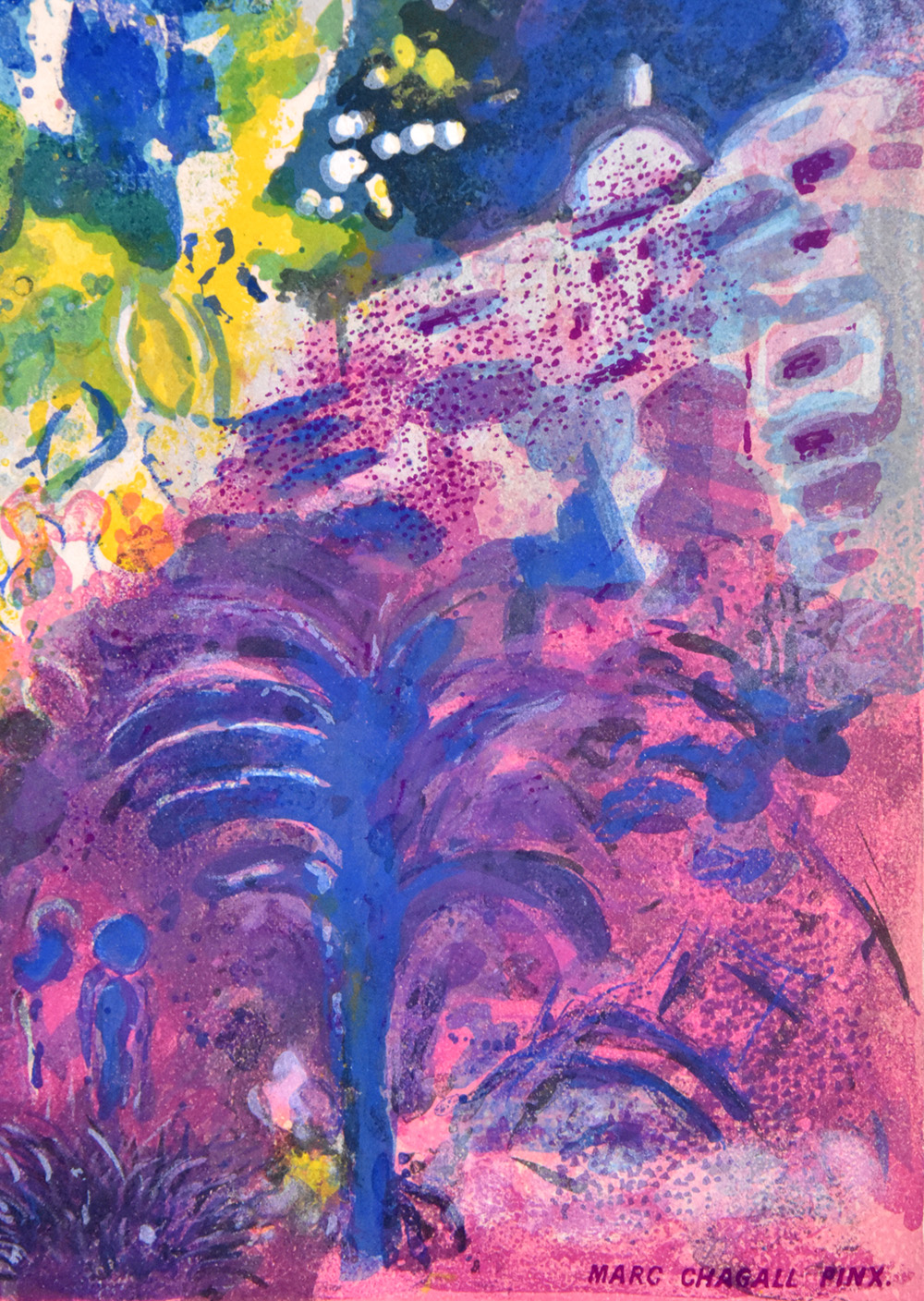 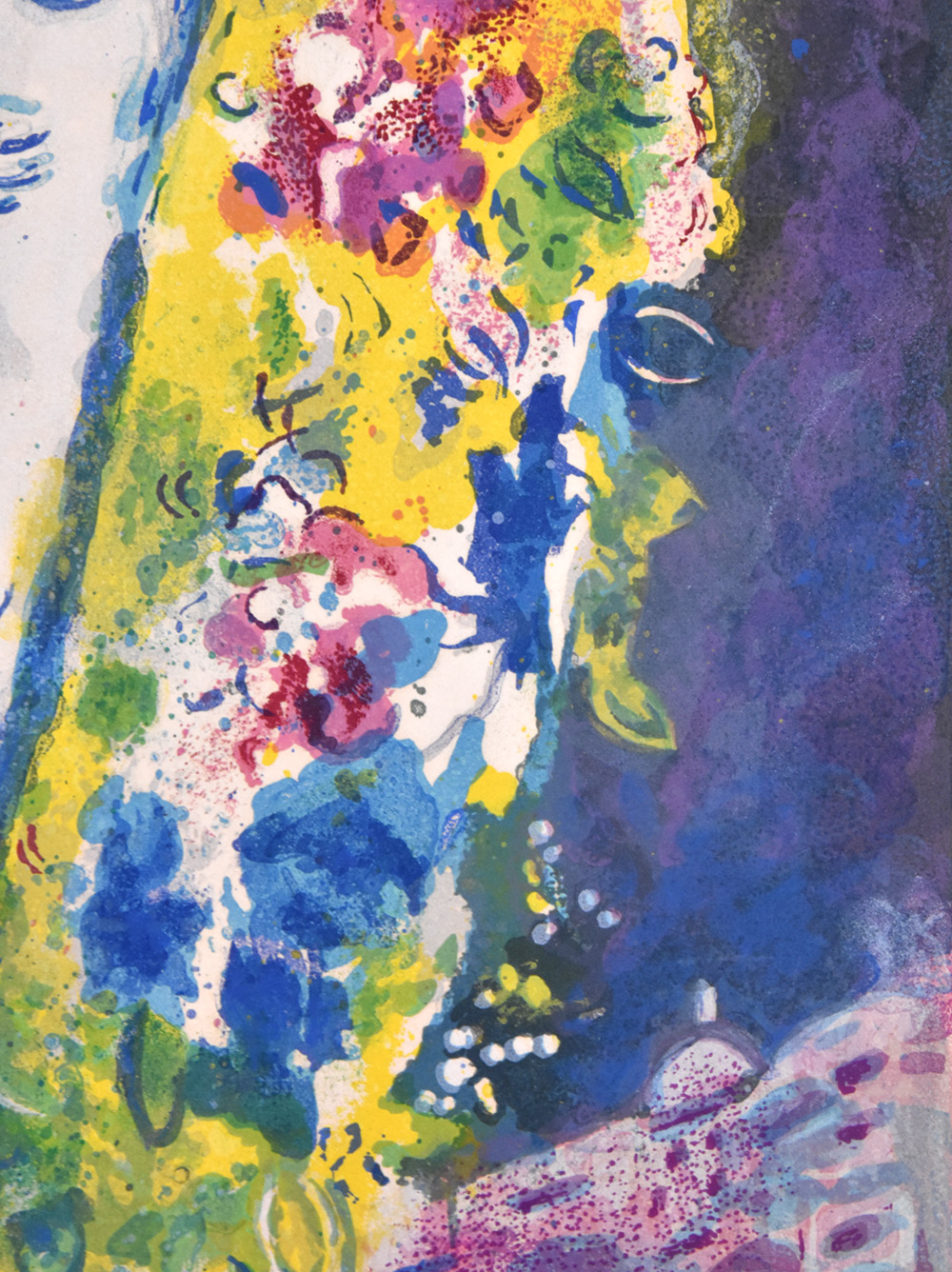 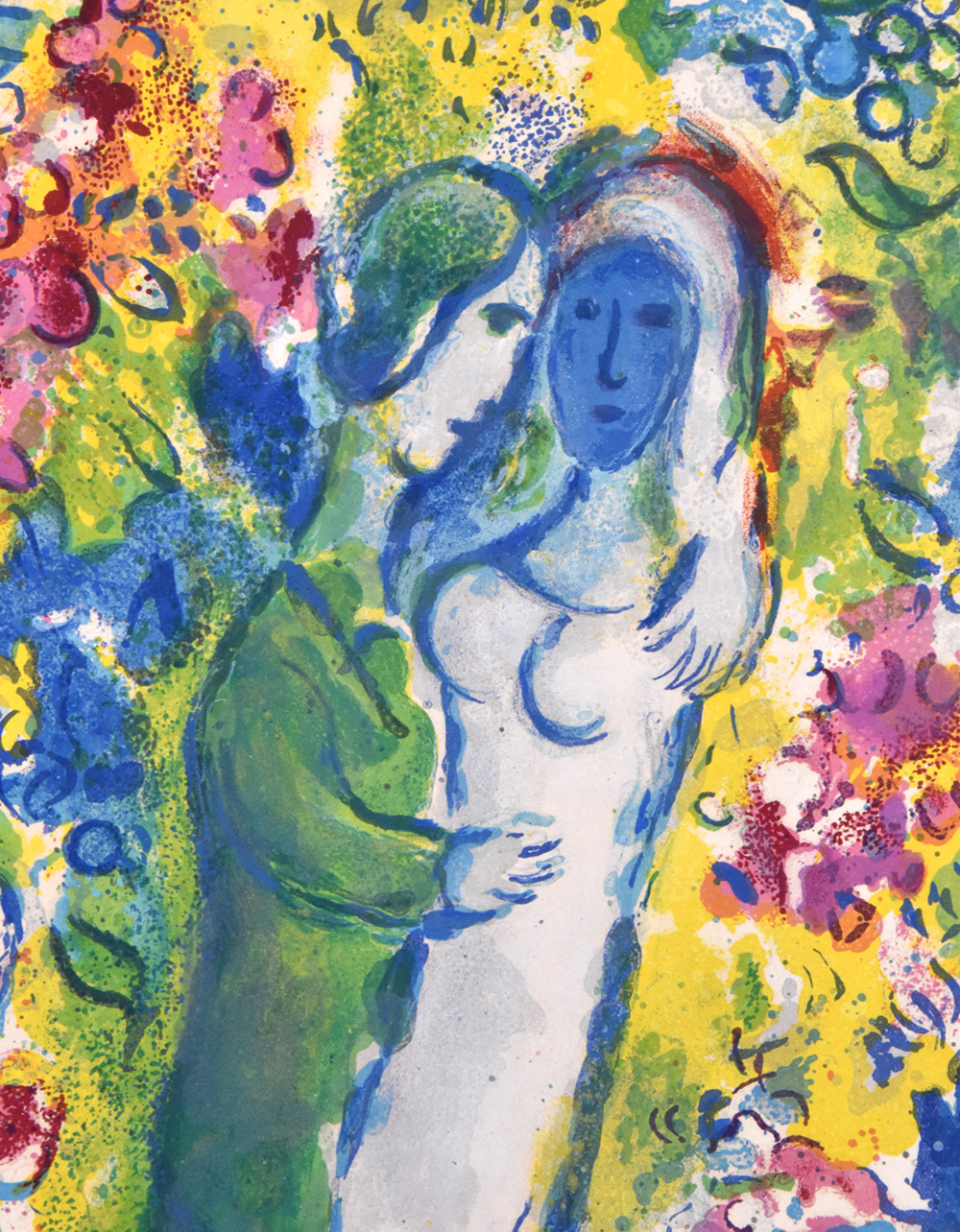 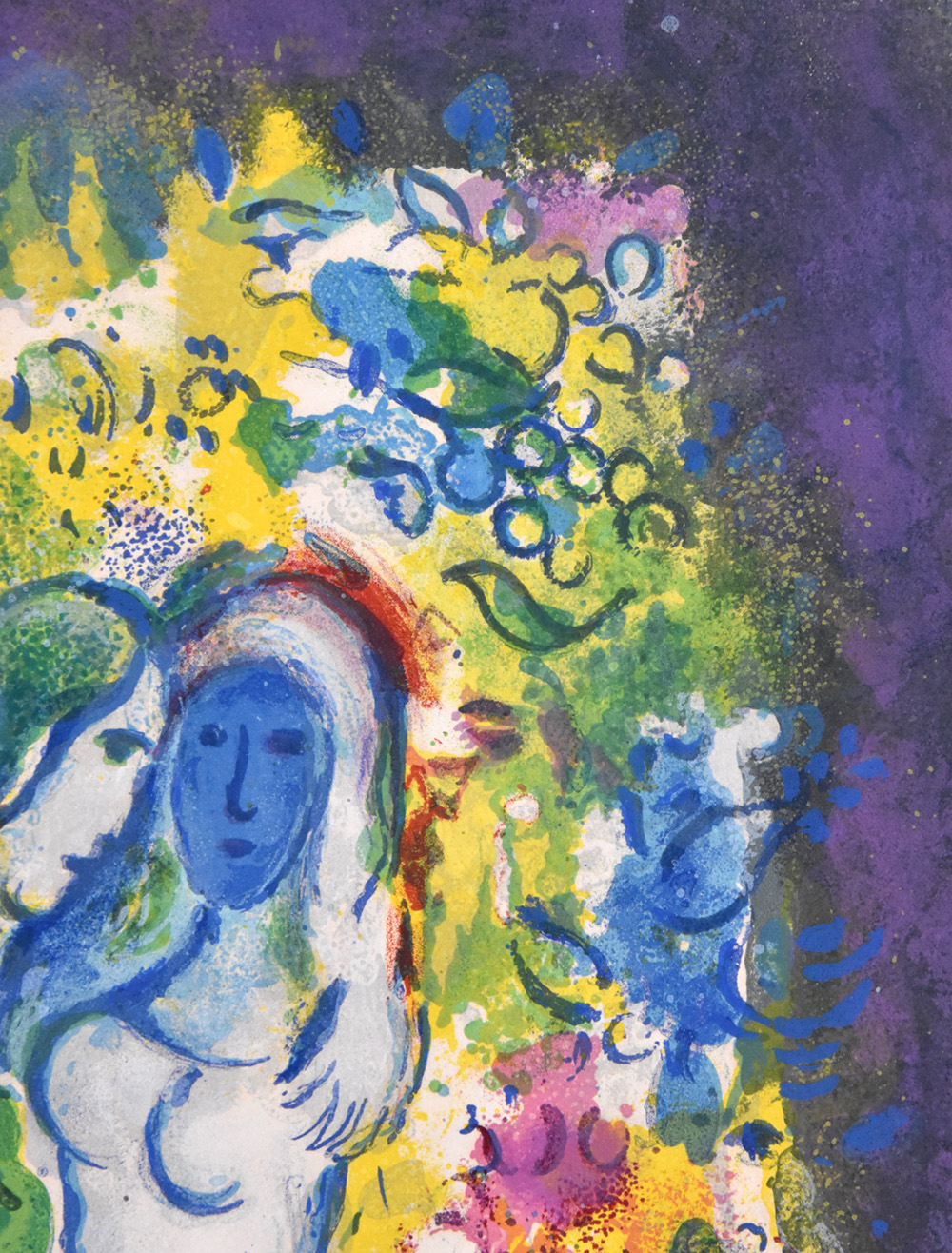 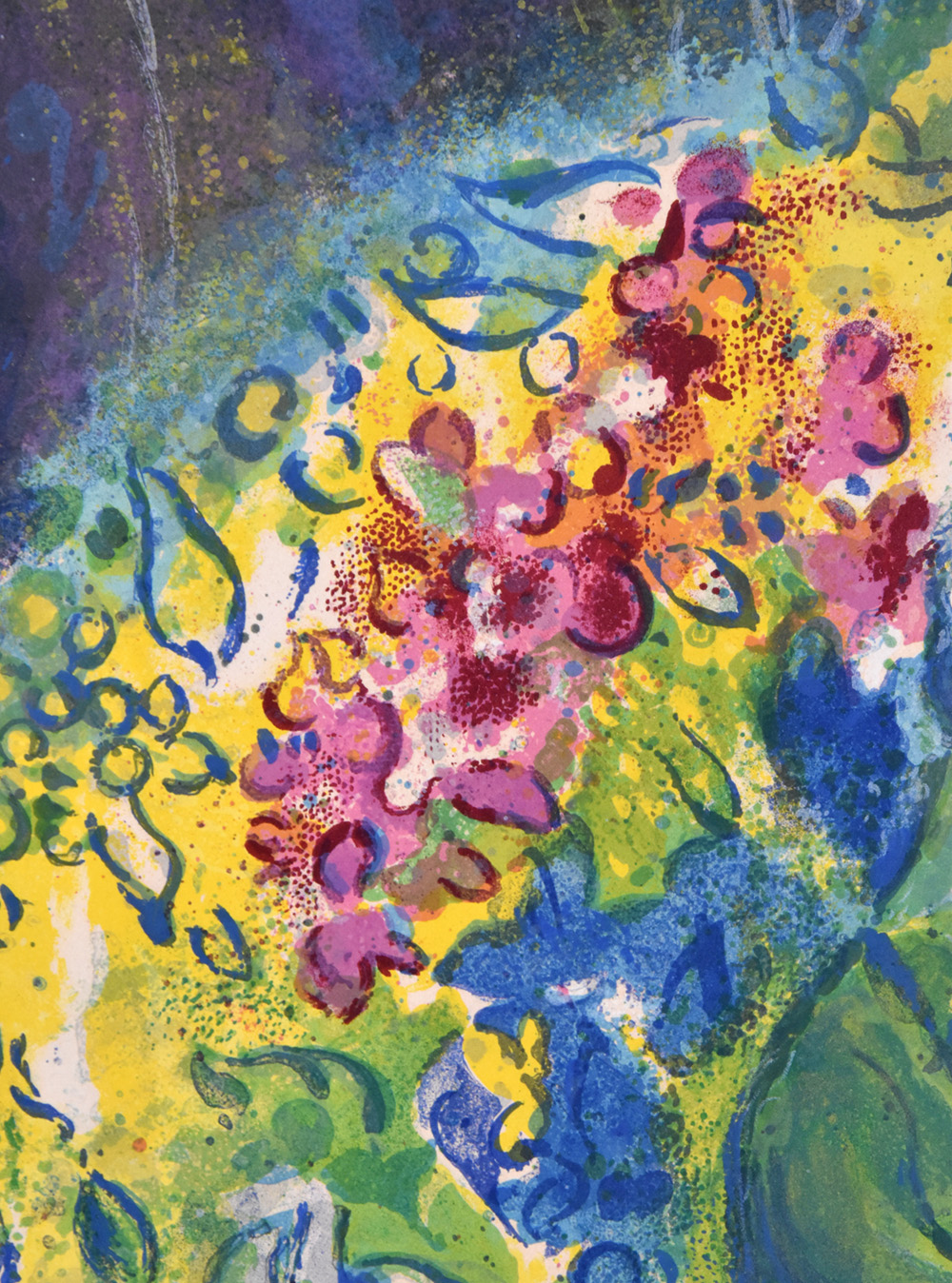 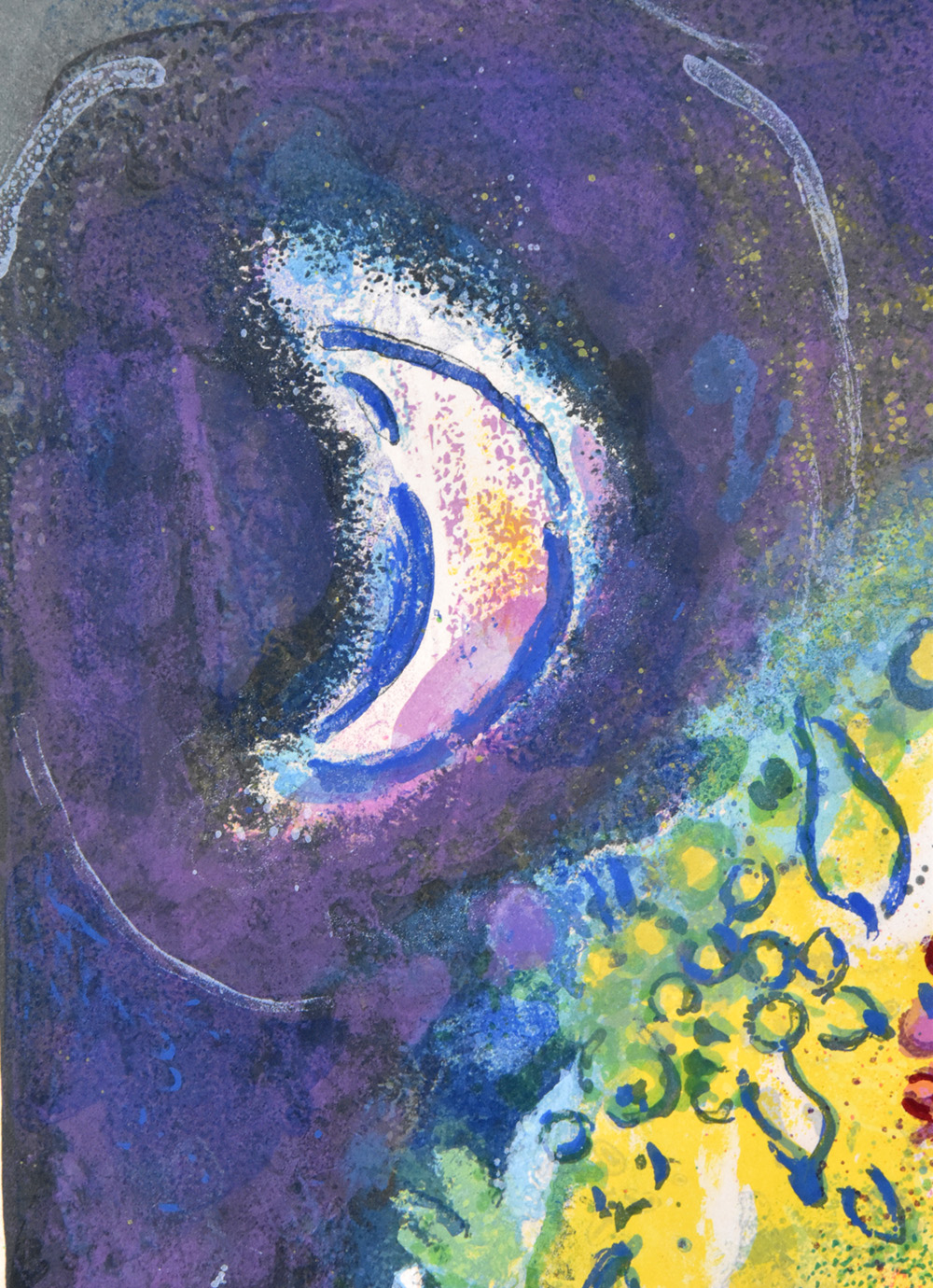 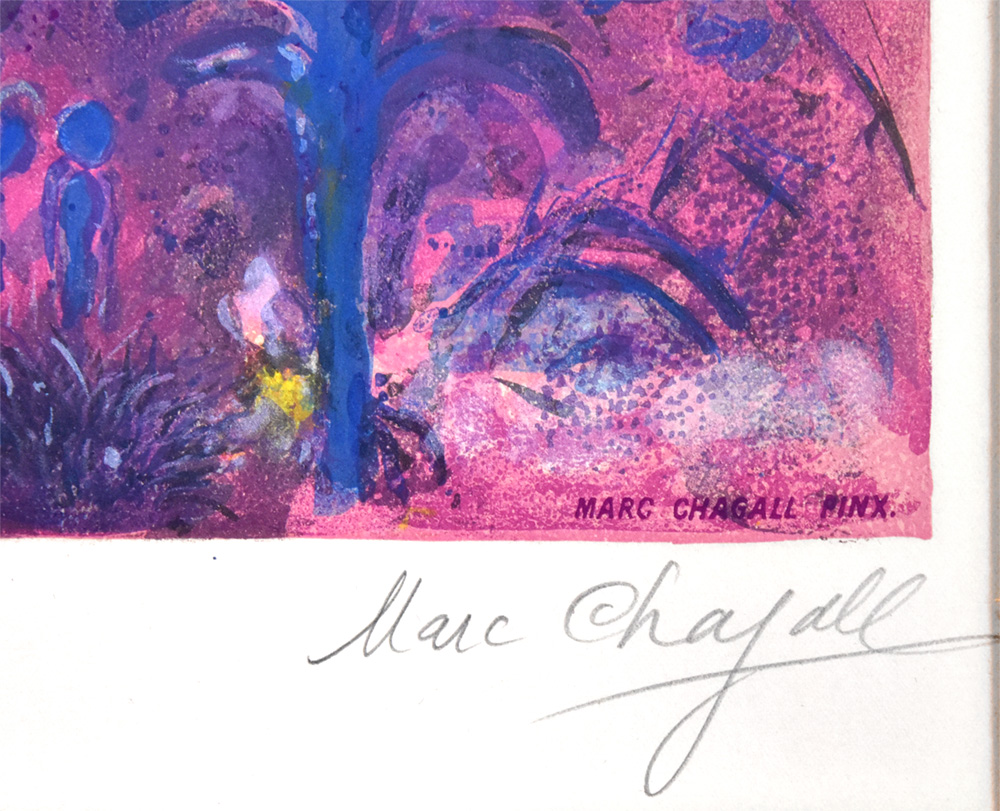 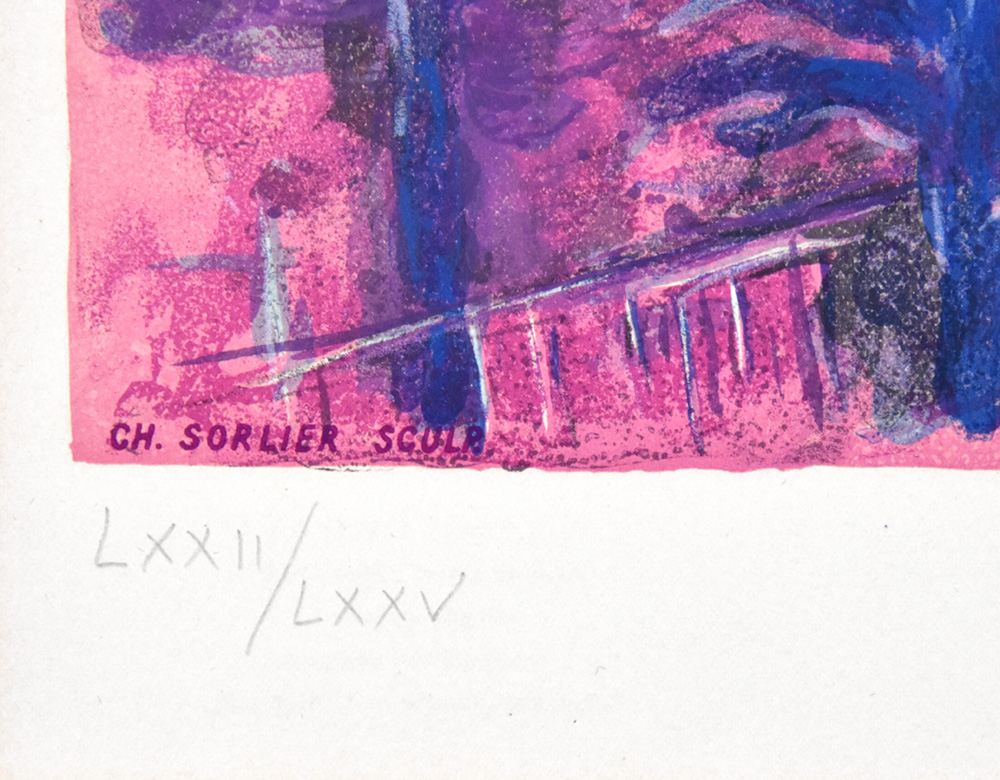 Chagall's ability to visually communicate intimacy in its most private and passionate existence is simply unparalleled. Couple in Mimosa takes place at night on the coast of France, as a bright moon illuminates the city below. The city bustles with night energy, filled with bold splashes of magenta and purple. Above the city, in the mysterious space between earthly life and a watchful moon, we observe a couple deep in love. The male gently embraces the female, looking at her intently and holding her securely. The passion transmitted from man to woman becomes a visual metaphor in the burst of multicolored floral images that surrounds the couple. These flowers act as a halo, symbolizing the physical and emotional union of this pair. Chagall's mastery of color and figural depiction shines through, as he invites us to enter into the romance and passion of this scene.

This piece is part of a set of 12 lithographs titled Nice and the Côte d'Azur that were created in collaboration between Chagall and Charles Sorlier. This work is numbered from the edition of 75 proofs in Roman numerals in pencil in the lower left margin (total edition of 150 signed and numbered in Arabic numerals, edition of 75 signed and numbered in Roman numerals, and a few artist's proofs). This piece is hand signed by Marc Chagall (Vitebsk, 1887 - Saint-Paul, 1985) in pencil in the lower right margin and signed 'CH. SORLIER SCULP' in the stone in the lower left of the image and 'MARC CHAGALL PINX' in the stone in the lower right of the image.

Catalogue Raisonné & COA:
Marc Chagall's Couple dans Mimosa (Couple in Mimosa), from Nice and the Côte d'Azur, 1967 is fully documented and referenced in the below catalogue raisonnés and texts (copies will be enclosed as added documentation with the invoices that will accompany the final sale of the work).

About the Framing:
This work is framed to museum-grade, conservation standards, presented in a complementary moulding and finished with silk-wrapped mats and optical grade Plexiglas.

Have one to sell? Sell Marc Chagall fine art with us

Sell your Marc Chagall fine art with us. We offer free evaluations. Learn more about selling with us.