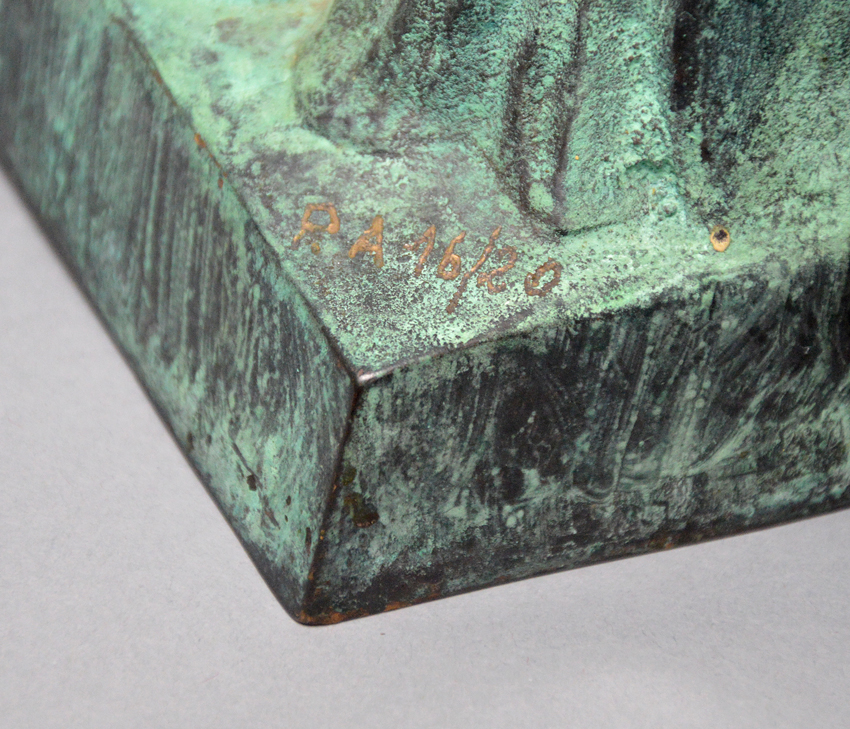 Arman Statue of Liberty features a recurring motif in the artist’s body of work. Throughout his career, Arman has worked with themes and techniques of “accumulations” and “deconstructions”- works of art which he either smashed, sliced or burned. These objects tended to be musical instruments, sculptural reproductions and even furniture. He began creating his “deconstructions” in 1959 with his Violins brules, instruments that he dissected into their wood panels. The motivation behind his artistic action is to suspend the action of deconstruction and control the final stages of an object’s life span. His object oriented approach harkens back to Marcel Duchamp. Yet, Arman differentiates himself by saying “as I evolved into object art, I found myself being called a Pop-Artist, but the term isn’t exactly right. Pop-Artists redo the object. I used the real object. Marcel Duchamp, who is the obvious father of object art, might have taken a soup can and put it on a pedestal. Andy Warhol would repaint the soup can. Jasper Johns would cast it in bronze. I’d take the soup can and cut it into pieces or weld hundreds of them together in order to change the state of the object from what it was when you first saw it in the supermarket. My interest is in exploring the various worlds of the object."

This unique view of the Statue of Liberty entices the eye to explore its many layers of diverse perspectives in interpretation. Each piece of the original statue is divided and staggered, retaining its original forms despite the image of deconstruction. Sitting atop her head is her famous gold crown. The torch in her right hand is also colored a brilliant gold sheen. Throughout the colors, one can still discern the intricate folds of her robe and the details of her costume. Her facial feature is subtly discernable, encouraging a closer study.

This cast bronze sculpture with green oxidized patina is an artist’s proof numbered from the edition of 20; aside from the numbered edition of 100.

CATALOGUE RAISONNÉ & COA:
Arman Statue of Liberty is fully documented and referenced in the below catalogue raisonnés and texts (copies will be enclosed as added documentation with the invoices that will accompany the sale of the work).

1. A Certificate of Authenticity will accompany this artwork.

His bronze sculptures speak to Arman's fascination with form, music, and rhythm and his exploration of culture. The most recognizable of his works are the Arman Violins.

Have one to sell? Sell Arman fine art with us

Sell your Arman fine art with us. We offer free evaluations. Learn more about selling with us.